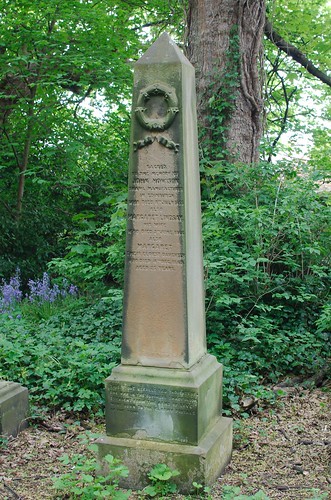 John Howison manufactured shawls and tartans at his premises in Drummond Street; he is also described as a woollen and linen draper. He lived at Rosehall, opposite the cemetery.

Shawlmaking was an important industry in 19th century Edinburgh. Popularised by the Empress Josephine, the Kashmir, or cashmere, shawl was the must-have accessory for the high-waisted dresses of the period. They were imported originally from the East at great expense, but local merchants saw a business opportunity, and technical advances in looms led to the development of a thriving industry serving the middle and eventually the working classes. Shawls were everywhere, draped on beds, couches and chairs, and flung over pianos and tables. Production peaked in the 1840s, when the vast crinolines then fashionable displayed them to advantage. They were killed off by the arrival of the bustle, which was better served by a neat little jacket. The market for shawls collapsed. We must hope that Mr Howison’s final years were not clouded by business troubles!

The "kirking shawl" illustrated was a popular Scottish style, usually in cream with a deep patterned blue border, worn for the first churching of a woman after childbirth, and for the subsequent christening.