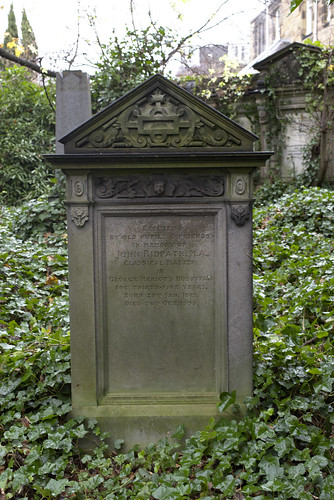 George Heriot's School in Lauriston Place was established in the 1630s through a bequest from the Edinburgh goldsmith George Heriot (banker to King James VI). It was intended to provide for the maintenance, relief, bringing up and education of poor boys, the sons of Edinburgh freemen. The first building erected outside Edinburgh's Flodden Wall, Heriot's Hospital was originally restricted to 180 foundationers but subsequently developed into a large independent co-educational school. In the 1830s it established ten other free schools around the city.

John Ridpath, a graduate of Edinburgh University, joined the staff in 1861, at the age of 42. As the classics master, teaching Latin and Greek, he held the senior post on the staff.

The design at the top of his gravestone incorporates strap-work similar to the lintels above the windows of the Heriot Trust's free schools, like the one that survives at the foot of the Pleasance (now a Salvation Army hostel).

Education was highly valued in 19th-century Scotland, so Ridpath would have been a well-respected member of the middle classes: his gravestone was erected by old pupils and friends. He was a family man (the death of a son is recorded) and apparently ambitious: he applied for the post of headmaster but was persuaded to withdraw his application. His home in Gilmore Place, rather than in the affluent suburbs, suggests that then as now labour at the chalk-face may not have been highly rewarded.