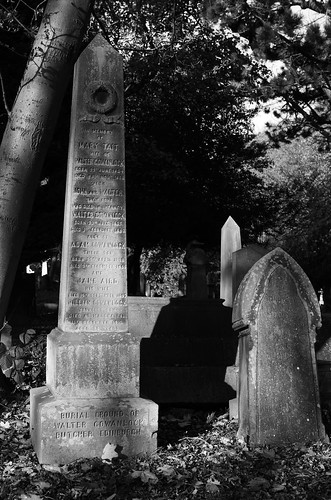 By the 1841 census Walter was a butcher in Chapel Street, St Cuthbert’s, Edinburgh, with his wife, surviving children Robert (13), Eliza (9), John Tait (6), Adam (3), William (4 months) and mother-in-law Elizabeth Tait (75). By 1851 he was in Cameron village, Liberton, with wife Mary and William age 10, a flesher employing two men. In 1861 he was a butcher at 8 Chapel St with his wife, sons Adam (22), a master butcher, and William (20), a bookseller. Walter and Adam were trading as W & A Gowanlock in West Nicolson Street and Chapel Street.

By 1881 Walter had retired and was living with his son-in-law Robert Anderson and family at 21 George Square, his wife Mary having died in 1868. The business continued to flourish and in that year Adam was at 22 Melville Terrace, a butcher, living with his brother William, a clerk.

Walter died in 1883, Adam inheriting his father’s share of the business, and his estate was shared between the surviving sons, Robert, Rev. John Tait, Adam, William and his married daughter Elizabeth Gowanlock Anderson, with a codicil about William. The inventory lists rental from property at 14, 20 & 22 Melville Terrace, 41 & 43 West Nicolson Street, 8 Chapel Street, 6 Dalry Park Terrace, 5 Nicolson Street, 7 London Street and 53 St Patrick Square. Adam’s wife Jane died in 1897 and Adam in 1905. It seems they had no children and Adam’s estate was divided between the children of his brothers Robert and the Rev John Tait and his sister Elizabeth Gowanlock Anderson.

By then the butchery business of W & A Gowanlock no longer existed.